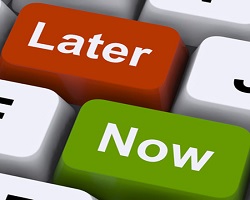 Most of the tasks that you procrastinate on aren’t actually difficult to do — you have the talent and skills to accomplish them — you just avoid starting them for one reason or another. The 2–Minute Rule overcomes procrastination and laziness by making it so easy to start taking action that you can’t say no.

There are two parts to the 2–Minute Rule…
• Part 1 — If it takes less than two minutes, then do it now.
Part I comes from David Allen’s bestselling book, Getting Things Done. It’s surprising how many things we put off that we could get done in two minutes or less. For example, washing your dishes immediately after your meal, tossing the laundry in the washing machine, taking out the garbage, cleaning up clutter, sending that email, and so on. If a task takes less than two minutes to complete, then follow the rule and do it right now.

The most important part of any new habit is getting started — not just the first time, but each time. It’s not about performance, it’s about consistently taking action. The 2–Minute Rule isn’t about the results you achieve, but rather about the process of actually doing the work. I can’t guarantee whether or not the 2–Minute Rule will work for you. But, I can guarantee that it will never work if you never try it. Anyone can spare the next 120 seconds. Use this time to get one thing done. Go.

admin@abilita.comHow to Stop Procrastinating by Using the “2-Minute Rule”06.12.2017