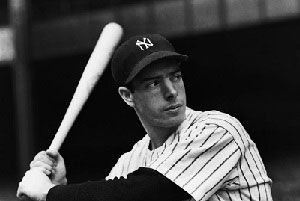 In recent years, the study of hard work has developed into a scientific pursuit named “deliberate practice”- focused and effortful training as the recipe for success. To demonstrate an example of deliberate practice, here is a little-known story about how Joe DiMaggio acquired his exceptional ability to become one of the greatest hitters in baseball history.

As the story goes, a journalist was interviewing DiMaggio at his home and asked him what it felt like to be such a “natural hitter.” Without saying a word, he dragged the reporter downstairs. In the shadows of the basement, DiMaggio picked up a bat and began to repeat a series of practice swings. Before each swing, he would call out a particular pitch such as “fastball, low and away” or “slider, inside” and adjust his approach accordingly.

Once he finished the routine, DiMaggio set the bat down, picked up a piece of chalk, and scratched a tally mark on the wall. Then he flicked on the lights to reveal thousands of tally marks covering the basement walls. Supposedly, DiMaggio then looked at the journalist and said, “Don’t you ever tell me that I’m a natural hitter again.”

We love stories like this—stories that highlight how remarkable success is the product of effort and perseverance. To maximize our potential, we need to know when deliberate practice makes the difference between success and failure and when it doesn’t.

The myth of deliberate practice is that you can fashion yourself into anything with enough work and effort. While human beings possess a remarkable ability to develop their skills, your genes set a boundary around what is possible.

Experts have discovered that our genes impact nearly every human trait including short-term memory to mental processing speed to willingness to practice. Some researchers have estimated that our genes account for 25-35 percent of differences in performance.

So where does this leave us?

If you can’t win by being better, then win by being different. By combining your skills, you reduce the level of competition, which makes it much easier to stand out regardless of your natural abilities.

The Magic of Deliberate Practice

Sun Tzu, the legendary military strategist who wrote The Art of War, believed in only fighting battles where the odds were in his favor. He wrote, “In war, the victorious strategist only seeks battle after the victory has been won.”

Deliberate practice is necessary for success, but it is not sufficient. The people at the top of any competitive field are both well-suited and well-trained. To maximize your potential, you need to not only engage in consistent and purposeful practice, but also to align your ambitions with your natural abilities.